This is one of most popular and sought after print from Pure Evil’s famous Nightmare series!

Jackie Kennedy (1929 – 1994), born Jacqueline Lee Bouvier, later Jackie Onassis, worked as a photographer before marrying ambitious Democratic politician John F. Kennedy in 1953. She became the nation’s most celebrated First Lady when JFK was elected US president in 1961. On November 21 1963 she was with Kennedy in an open car crossing Dealey Plaza in Dallas when the shots were fired that changed America’s sense of itself, breeding paranoia and countless conspiracy theories.

Historians have chipped away at the Kennedy myth – he was “the most overrated president of the century”, according to one – but at his death he was aligning himself with popular movements for change in American society, proposing a civil rights bill just months before he was murdered.

His funeral at Arlington National Cemetery was watched by millions on television. 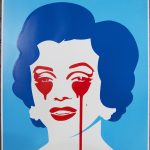 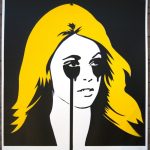