Street Art and Urban Contemporary Art are the most inspiring and refreshing art movements of the modern art scene today. St. Art Gallery aims to give exposure to these art forms and to provide a platform for emerging talented and innovative artists. 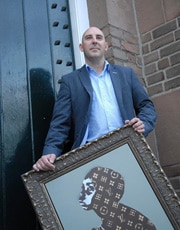 For many years now Geoffry van Vugt (founder and owner) has collected art objects from famous and beginning artists. Finally his love for Street & Urban Art gave rise to the idea of opening an art gallery fully dedicated to promising street artists. St. Art Gallery is founded in 2009 and located in an exceptionally unique place: the Water Tower of Stampersgat in The Netherlands.

In short, St. Art Gallery presents socially critical, subversive and satirical art to those who are willing to be aesthetically challenged. Are you prepared to take up the challenge?

You are very welcome to visit our gallery in the water tower of Stampersgat, where we show a beautiful and diverse collection of Street Art and Urban Contemporary Art.”

Street Art has its origin in the graffiti scene. What once began as tags (pseudonyms) on walls in public spaces by ‘graffiti vandals’ has developed into a full-fledged art movement. Many Street artists are still working under a pseudonym in order to conceal their true identity matching the ‘tag’ tradition.

Street Art is art developed in public spaces, anything from graffiti, stencil-graffiti, street installations, street posters and stickers to the more traditional artworks as paintings or silkscreen prints. Street Art often holds a political message, but could be merely background entertainment for the coincidental passenger.

Although Street Art appears to be a pioneering movement, it goes back a long way and is initiated by the well-known artist Keith Haring & Jean Michel Basquiat. Nowadays at the helm of the movement stands Banksy, who is one of the most influential and famous Street artists in the world. The artist behind the pseudonym Banksy is yet unknown.

Street Art is a global art movement and has become a part of our surreal urban setting. It colours our cities whilst surprising the passing urban dwellers. Several European cities foster a pioneering street art culture, foremost the UK followed by Germany and France.

Urban art represents art that is produced by street artists working in galleries and museums, and also covers art from artists using more traditional media but with urban culture and political issues as a subject matter. In short, Urban Art is the movement of street art into galleries and museums. Today, the term Urban Contemporary Art is increasingly used by reputable auction houses such Soltheby’s, Christie’s and Philips de Pury.