From the proceeds 50% is being donated to the New York fire department.

Ash Wednesday was photographed at dusk on September 12, 2001.

Fred’s wife at the time entitled it Ash Wednesday, which certainly made the point.  One could not say anything more.

On that memorable day, Fred was hiding under a fire truck shooting the scene.  He shot about nine frames, and when the lead fireman’s hand went up, he knew at that moment he had captured the essence of the day.

Fred had no idea how many times this image would get reproduced across the world in the following months.  He did say,  “That is it – I got it,” and crawled out from under the fire truck’s wheel, only to be handcuffed and led off the site by two NYPD police officers.  The officers informed him that he had invaded a crime scene.  Fred then pleaded with them to not arrest him.  The officers walked him briskly three blocks south, took his press pass from his neck, uncuffed him and gave him back his cameras.

Soon after, Time Magazine ran this image as its opening spread in their book on 9/11.  The image was in many magazines and newspapers all over the world.

The comparison of Ash Wednesday to the impact of WWII’s, Raising the Flag on Iwo Jima, by Joe Rosenthal, is quite a compliment.  It certainly chronicles the FDNY looking for survivors and their brethren.

Fred presented a framed print to every Manhattan firehouse, and several firehouses in Brooklyn.

Finally Ash Wednesday is part of the “Here is New York: Remembering 9/11 exhibition” at The New-York Historical Society.

Ego Leonard | How Are You Doing 2 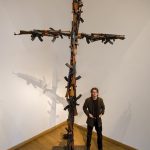